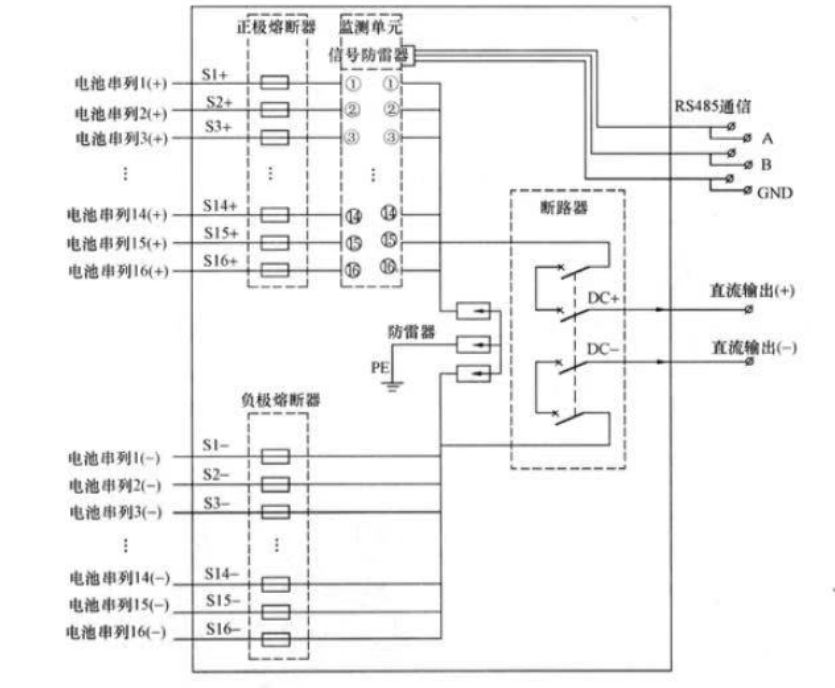 4 The choice of lightning arrester

The output end of the photovoltaic DC combiner box should be equipped with a lightning protection device, and both the positive and negative poles should have lightning protection functions. Specifications should meet the following requirements:
1) The maximum continuous working voltage Uc:Uc>1.3Uoc(STC).

3) Voltage protection level Up, Up is the nominal discharge current I. The test values below, the specific application requirements are shown in Table 1.

4) The lightning arrester should have the function of disconnector and fault indication.

In order to facilitate users to grasp the working conditions of photovoltaic strings in a timely and accurate manner and ensure that the solar photovoltaic power generation system exerts the maximum effect, the photovoltaic DC combiner box is generally equipped with a monitoring device. The monitoring device can monitor the current of each output circuit, the voltage of the DC busbar and the working state of the lightning arrester. The monitoring device generally recommends self-power supply to avoid the problem of large-scale and long-distance power supply. The monitoring device generally adopts the 485 communication method [bus serial interface communication, the maximum transmission rate of RS485 is 10Mbps, and the maximum transmission distance is 1500m. ); logic "0" is represented by the voltage difference between the two lines - (2~6V), the interface level is generally lower than the end of the chip to protect the circuit, and this level is compatible with TTL level, and can be connected with TTL circuit] , in order to prevent the overvoltage caused by lightning from the communication line from being introduced into the photovoltaic DC combiner box, it is required to install a signal lightning arrester at the 485 interface of the photovoltaic DC combiner box, and the communication line should be shielded by armor or laid through steel pipes. The way.